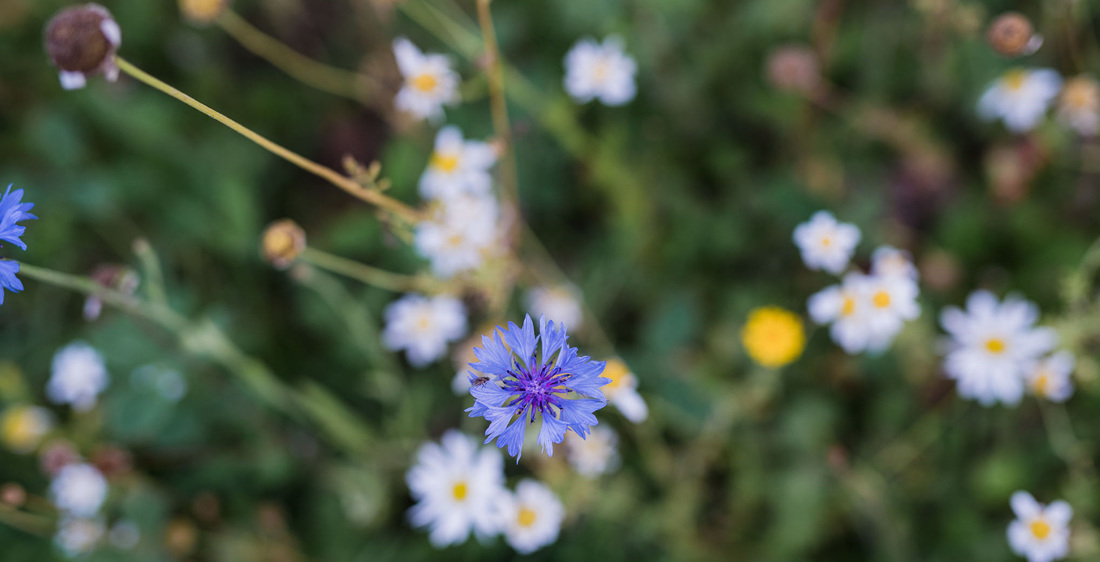 Image by Angela Ward Brown
Wild flower meadows (Nick Grey NGray@dorsetwildlifetrust.org.uk)
Wildflower meadows and grasslands are so important because they support a fantastic variety of plants, as well as providing valuable habitat for wildlife to feed and nest in. Sadly some 98% of English meadows have been lost to intensive farming resulting in the decline of  60% of native species. One in 10 species are heading for extinction in the UK.
Two meadows at Hogchester have been reseeded with seed stock from Stonebarrow Hill and Thorn farm.   This has been led by Nick Grey (Dorset Wildlife Trust).

Birds (Brendan Sheils  sheilsbrendan@yahoo.com)
Hogchester is registered as a CES Study site (Constant Effort Ringing Scheme) and recognised as an important bird migration and breeding area.  Brandon is cataloguing and ringing the bird life on Hogchester and is installing a hundred bird boxes for various species. He is certified by the British Trust for Ornithology and is working closely with other local experts.
​
93 species have been noted in the area on and around Hogchester.  Swallows romance the fields in summer, buzzards can be seen hovering, and as the sun goes down you can hear the distinctive call of owls. 2017 data has shown unique migration patterns and usage from migrating warblers.

Butterflies (Hannah Dawe hannah.dawe@ymail.com)
Hannah has established a butterfly transect at Hogchester in partnership with Butterfly Conservation Dorset.  In the past two years we have identified 23 species of butterfly the most recent additions being the grizzled skipper and white admiral
Historically Hogchester was home to a colony of marsh fritillaries and we are working to restore wetland grass habitats within the SNCI in the hope that they will return.  The restored wild flower meadows support large numbers of meadow browns and marble whites

There are currently three ponds on Hogchester that support an abundance of dragonfly and damsel fly.   These magnificent insects can be found hunting all across Hogchester.  In the coming year there are plans to re-wild a large 14 acre field starting by digging at least 4 new ponds.   We anticipate expansion of insect and bird life to following this designation for that land.

Bats (Hannah Dawe hannah.dawe@ymail.com)
​Seven species of bats have been recorded in the SNCI area of Hogchester. Noctule, Whiskered Daubentons, Saprano Pipestrell, Common Pipestrell, Serpentine Pipestrell and Barbestelle. Barbestelle are rare with only 5000 known in the UK.  More recently the grey long-eared bat was identified as a visitor to one of our outbuildings. This bat is considered to be one of the UK's rarest species and its population appears to be declining (Razgour, 2012). Further bat surveys and ringing are planning in collaboration with the Dorset bat group.

Soay Sheep (Rob Powell rob@hogchester.com)
We keep a flock of rare breed Soay sheep for conservation grazing on the land. Soay are a primitive breed that come from the remote islands of Soay and Hirta off the northwest coast of Scotland.  They are thought to have descended from the flocks of primitive Bronze Age shepherds. We raise our British Soay Sheep with full pedigrees traceable with the Rare Breeds Survival Trust in Great Britain.
​Volunteering (Rob Powell rob@hogchester.com)
If you would like to be a part of the conservation effort here at Hogchester, or in a wider context with Dorset Wildlife Trust, then do get in touch directly with the members of our team.   At Hogchester we will host various one off activities throughout the year and there are also ongoing projects that you can get involved in.   Brendan is happy to talk about his work and will receive visitors at Hogchester by arrangement.  If you would like to learn and help with the butterfly survey then do get in touch with Hannah.